How to Re-Config Replication with existing seed on vSAN

I have been asked about re-configuring  replication for a VM without deleting the destination folder for a VM which is already replicated . In a traditional storage , we were simply renaming the folders on the destination datastore (Can be a local or a remote site) , we used to re-name the folder at the target site , perform a force stop replication at source and target site and simply re-configure replication to the same folder using existing seeds to avoid a full-sync between the two sites .

Things can get very complicated with vSAN as we donot have an option to directly rename the folder ,the folders which we create is merely a symlink to a UUID (NameSpace folder) on the vSAN datastore and hence we cannot rename the UUID .

Three node vSAN cluster running vSAN 6.7 at both Primary and Secondary Site . We are using VR version 8.1 in this illustration . We have a  VM called win7 which is being replicated from source to Target Site .

VM we are going to work with is win7

Lets look at the replication configuration from Source and the destination objects at the DR site . Here we see the  VMDK which is being replicated from source host p-h1.vsensei.local for the VM “win-7” which has a vDisk called win7.vmdk , replication ID for this VMDK is RDID-16d6932c-0b80-4838-bb36-f52fabf8fd97  (see on the left hand side under get-config details using command “vim-cmd hbrsvc/vmreplica.getConfig VM-ID”). On the Right side we see the datastore⇒NameSpace path where the VM is being replicated to . This contains the hbrdisks (vmdk) with respective RDID disk/ (Journal disk) i.e “hbrdisk.RDID-16d6932c-0b80-4838-bb36-f52fabf8fd97.18.39977055102374.vmdk” and the respective base disk for that VM which is in this case is again win7.vmdk (At the Target Site)

Just to show you the object attributes for the NameSpace which correlates to the vm-folder with command “esxcli vsan debug object list” against the UUID for the actual vmdk object where this pointer file “win7.vmdk” is pointing to at the DR site .Please also note that in the vSAN datastore , the pointer file will not be pointing to  a “VM_NAME-flat.vmdk” like on a VMFS file system where the data gets written it actually points to an object on the vSAN file system as seen below . hence the pointer file will usually be in bytes , same applies to the HBR-RDID files who also point to a vSAN object in the backend .

Make a note of the namespace folders (VM working directory where the vmx , vmdk etc are located ) at both primary site and the DR site .

Force stop replication at the protected site or the Primary site .

Create a dummy/temporary folder on the vSAN datastore at the Target or the Destination site and copy all the content from the current target replication folder to the dummy folder .

Note : It is expected that the replication status for the VM at the target-site in the incoming direction will show up as “Error state”

I preferred the SSH method to copy the content of the files from the current target destination folder to the Dummy Folder . 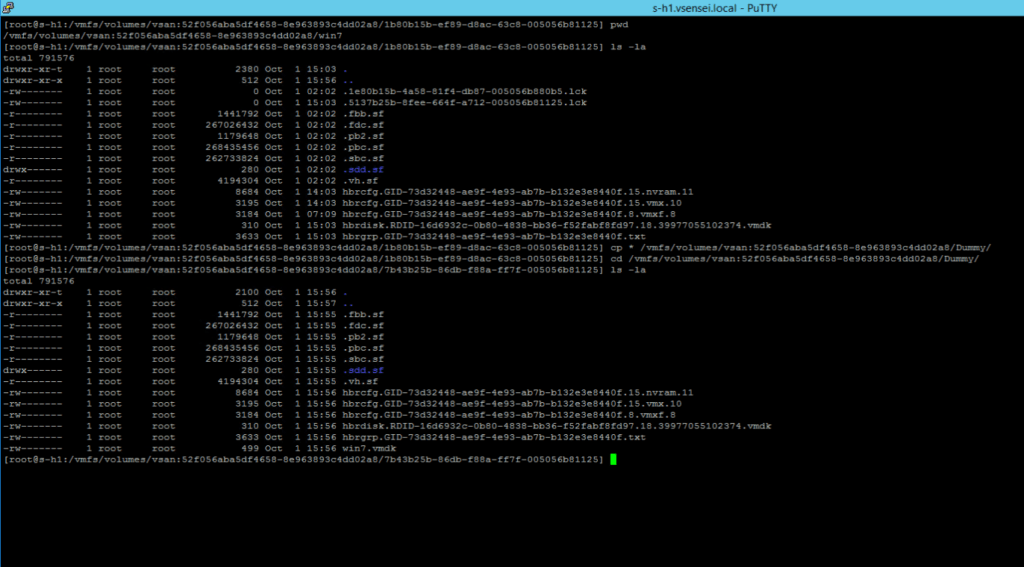 Once I have copied all the folder content from the target folder to the dummy folder , I delete the content inside the original target folder , in my case it is the files inside folder “win7” at my target site .

Now that we have successfully stopped replication from both source and the target site . We are good to copy just the actual vmdk object , here in this case win7.vmdk from the “Dummy” folder back to original target folder . The reason we dont have to copy the other files is because when we reconfigure replication from the source site  , we will create a new RDID and respective HBR-RDID vmdk for the replication session , the current files are no longer valid/required .

From the above screenshot we can see that the win7.vmdk is copied back to to the win-7 folder (Original target Folder) .

We can now safely re-replicate the VM from the source to the same target folder using existing seeds , avoid a full-sync replication and only replicate the delta-changes to the Target .

It is good to check the status of the replication from the command line as we will still see the status on the GUI as full-sync however vSphere-Replication appliance will only be comparing the checksum data between the two VMDKs at the source and target once it finishes the checksum comparison , the replication status will go back to read state . You will also see that the amount of data transferred to the Target site will be 0 bytes. 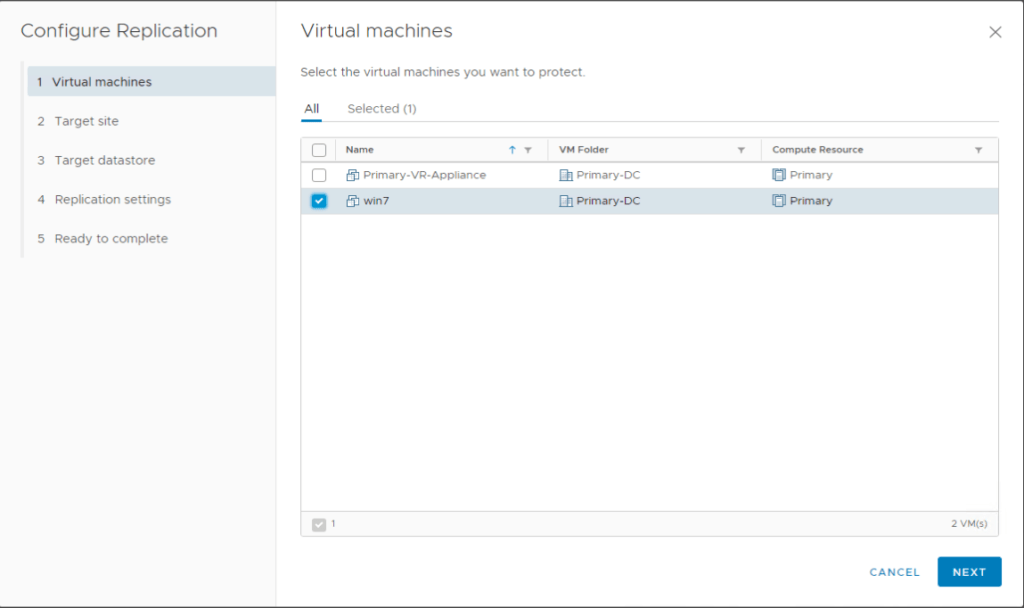 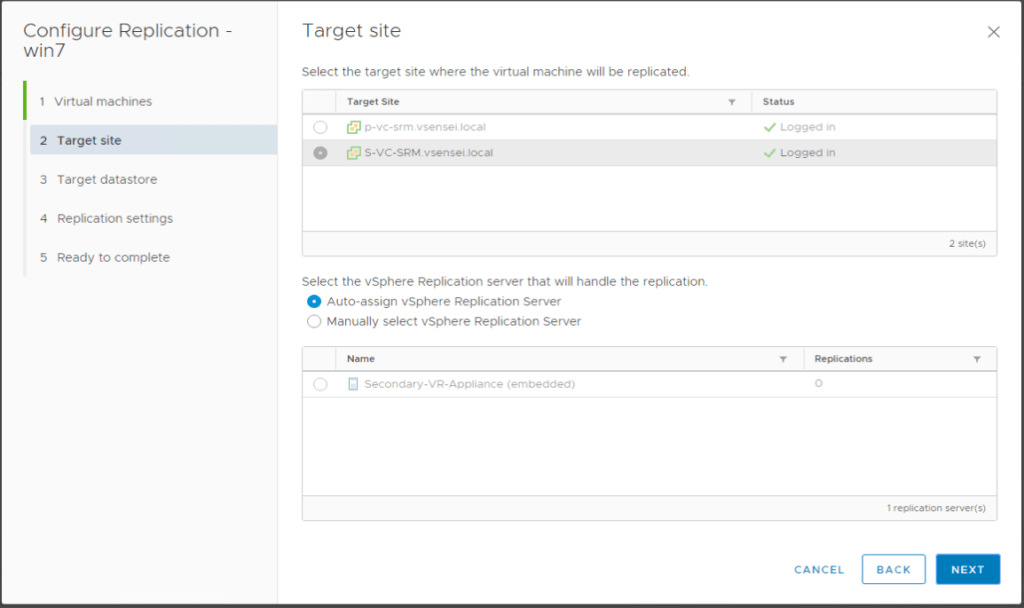 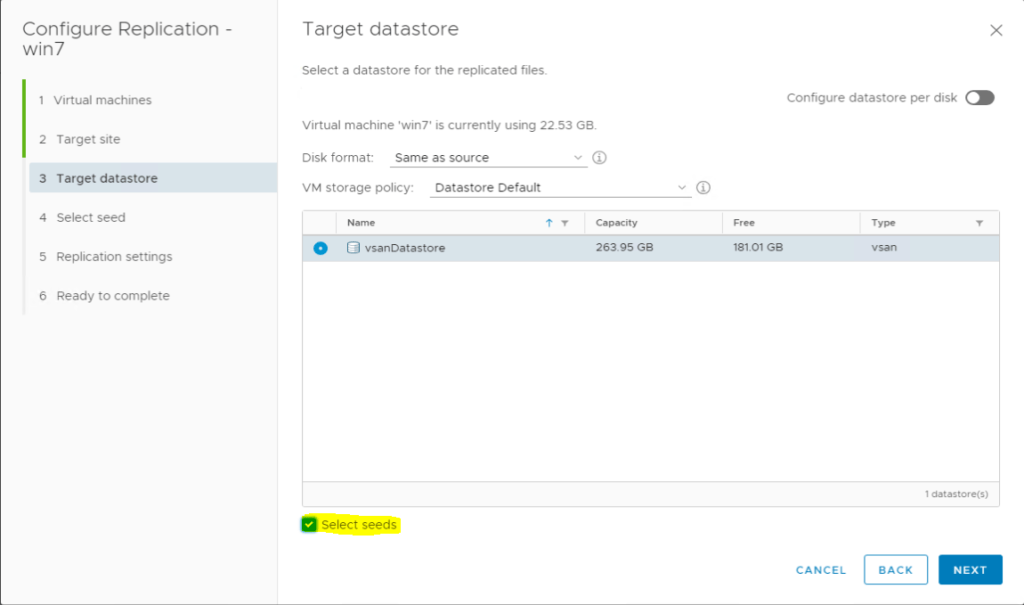 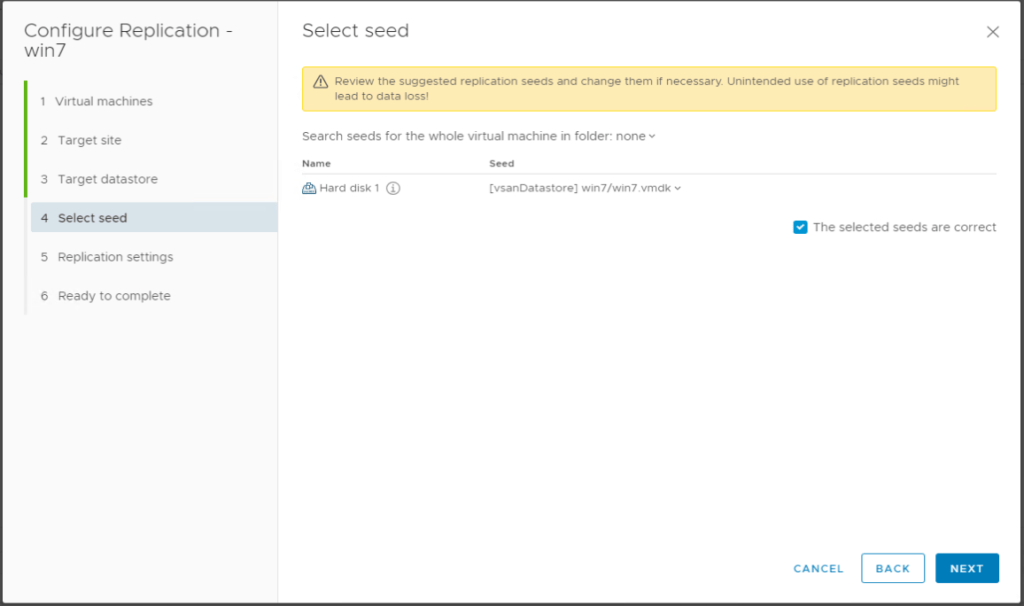 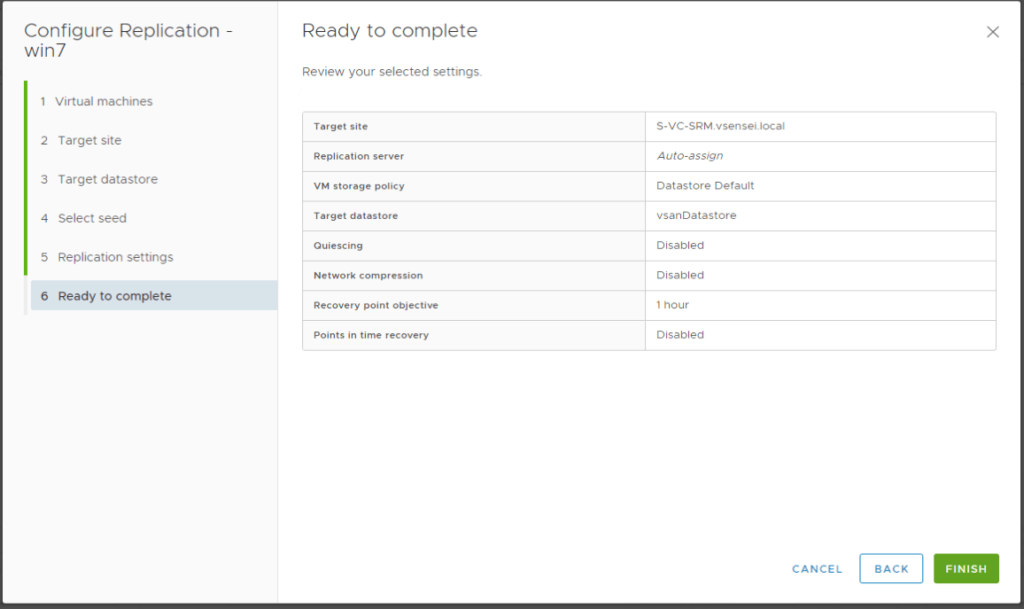 We are saving a ton of bandwidth usage between to sites as we do not have to do a full-sync to the target site , rather only do a simple checksum comparison and continue to re-replicate the VM using existing seed .